On March 6, 2018, Seeking Alpha reported that Halliburton’s frac’ing fleet was surging across the country.  This is, of course, a great news story for the American oil and gas industry.  The U.S. government’s statistical agency expects both oil and gas to hit record levels of production in 2018, and almost all of the growth is coming from frac’ing.  Halliburton is a huge part of this, though there is some disagreement over just how fast Halliburton is ramping up.

Who Knows What Halliburton is Doing?

Halliburton has a strong foothold on fracturing services in the United States (see information box below).  They’re required by law to make some disclosures, but the company is not in the business of publicizing all of its work.  As a result, industry watchers are left to make their best estimates about what Halliburton is doing.

The article states that Halliburton grew its frac’ing fleet by 700,000 horsepower in 2017, giving it a total of more than four million horsepower of frac’ing equipment under its control.  The information in that article was supplied by Rystad, a Norwegian based company that offers consulting services and business intelligence to the oil and gas space.

We have a slightly different view. Primary Vision estimates that Halliburton currently has 115-120 marketed frac’ing operations, called frac spreads as of the writing of this blog.  Each spread is powered by roughly 36,000 horsepower of pumping equipment and also contains other necessary equipment, like data trucks, storage tanks, and frac’ing fluid blenders.  Our estimates of both Halliburton’s active (108) and marketed spread count (115-120) ramped up much faster than others.  We think the company actually increased its fleet operations over the course of 2017 by about 1.2 million horsepower, not 700,000.

We estimate that Halliburton went from 72 to 108 active spreads between the first and third quarters of 2017.  This run up, coincidentally or not, correlates closely with a March 2017 announcement that two competing frac’ing companies, Schlumberger and Weatherford, were going to create a joint venture called “OneStim.”  That idea was abandoned at the end of 2017, with Schlumberger instead simply buying Weatherford’s assets. 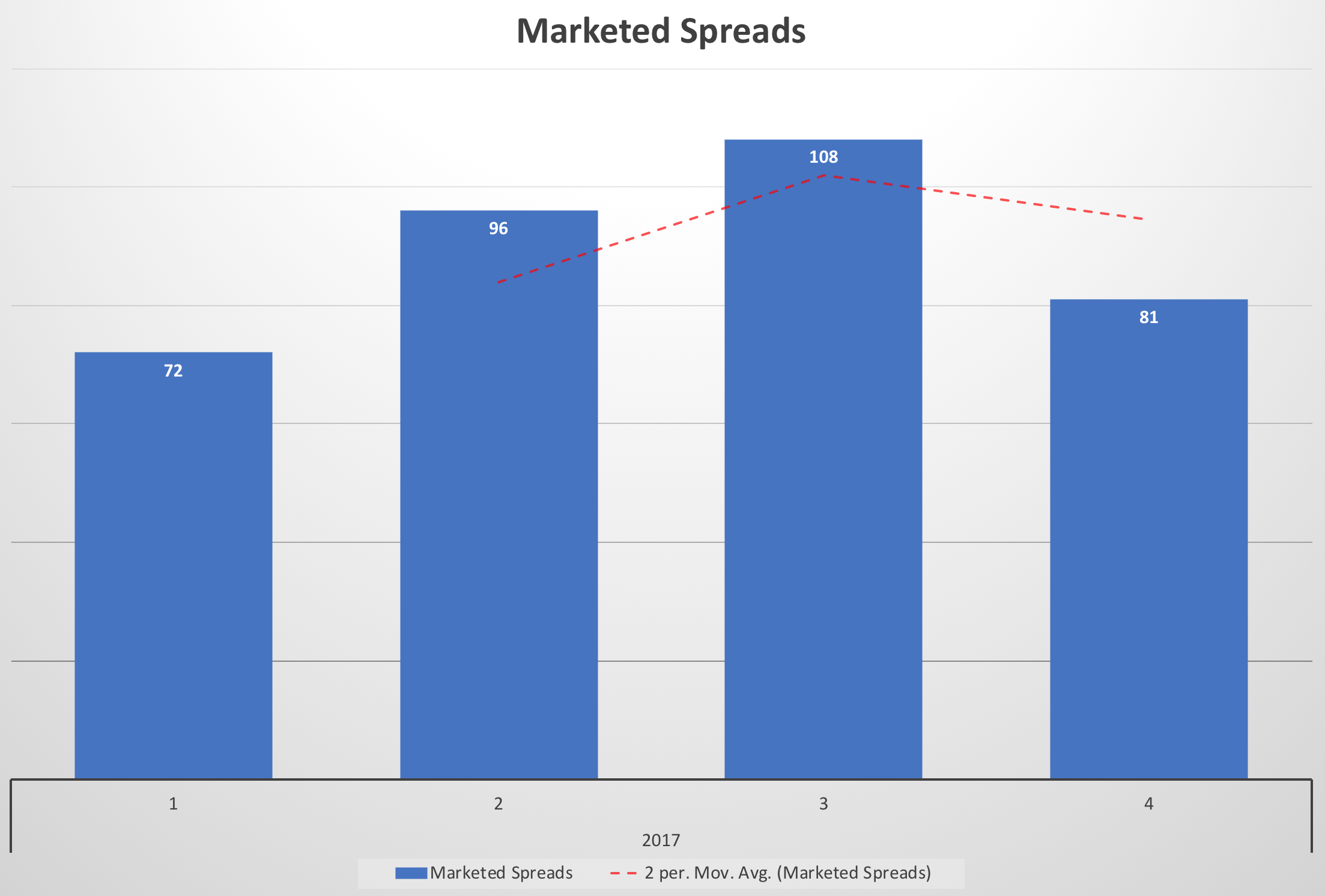 Where is the Extra Capacity Coming From?

One unique strength of Halliburton is that the company manufactures its own frac’ing pumps.  The latest and greatest version is the Q10 pump, which is the centerpiece of the company’s “Frac of the Future” system.  Halliburton reportedly began replacing its pumps with Q10s in 2013.  When oil prices really began to crash in 2014 the company appears to have accelerated its retirement of the older pumping systems.  The company said some of its older equipment was being retired permanently while other equipment was being “cold-stacked” and could be brought back into service later.  In 2016, then CEO Dave Lesar, (he retired on June 1st of 2017 and was replaced by Jeff Miller) said that if the market ever turned around, Halliburton would have “multiple levers” it could pull, including accelerating the manufacturing and deployment of the Q10s and presumably also reactivating some of its older equipment (ie. Grizzly™ pumps).

We believe that Halliburton has activated more of the old equipment than other analysts are assuming.  These assets were quickly deployed in response to both improved market conditions and presumably also the threat of competition from the likes of OneStim, other competitors as well as new entries such as Pro Frac, and Alamo Pressure Pumping.  As a result, Halliburton’s industry-leading frac’ing fleet contains a mix of both new and old pumps.  We estimate that Halliburton has approximately 4.2 million horsepower marketed.

Many businesses need to know exactly how much frac’ing is happening in the U.S. and Canda.  Primary vision’s flagship product, the Frac Spread Count, provides both high-level aggregations of industry-wide data and detailed information on each service provider’s activity in each region.  Our Frac Spread Count has grown in popularity since its inception in 2013.

Primary Vision has just released the Winter Update to its flagship Frac Spread Count Report.  Many casual industry observers are familiar with the Baker Hughes count of active drilling rigs, but we believe it is just as important to track the number of active hydraulic fracturing operations, known as frac spreads.  These frac spreads are units made up of fracturing pumps, data trucks, storage tanks, chemical additive units, hydration units, and blenders.  We use cutting edge technology to tell our customers how many frac spreads are operating across the industry, along with granular data on each company in each shale play.

The Winter Update validates our previous predictions that, at least in a number of key basins, the industry is focusing on completing already-drilled wells.  The drilled, yet uncompleted, wells are called “DUCS.”  Many analysts have taken to calling America’s DUCS the “fracklog.”  This abundance of pre-drilled wells allows American producers to ramp up production quickly if (and when) OPEC tries to drive up prices.

Data from the U.S. Energy Information Administration shows the number of DUCS at a record 7,483.  Saudi Arabia is seeking to open its state oil company up to investors by the end of 2018, and it needs a high oil price to get the best possible deal.  To that end, the Saudis have been doing their best to enforce production quotas on OPEC members.  We believe based on our research that the OPEC deal on quotas is likely to hold for longer than most in the industry assume.

Rising oil prices have a very direct effect on the number of frac jobs completed each year.  The count of active frac spreads has risen only slightly, because the U.S. fleet is largely already deployed, but the number of frac jobs completed is rising.  27,838 frac jobs were completed in 2014 before oil prices collapsed, and then the number dropped to 16,930 in 2015 and appears to have bottomed out in 2016 at 9,650.  Activity has now turned around and in 2017, 11,826 frac jobs were completed as of the writing of this article (PV believes the total will be closer to 13,000 after all completion reports are filed). 2018 will continue the surge. 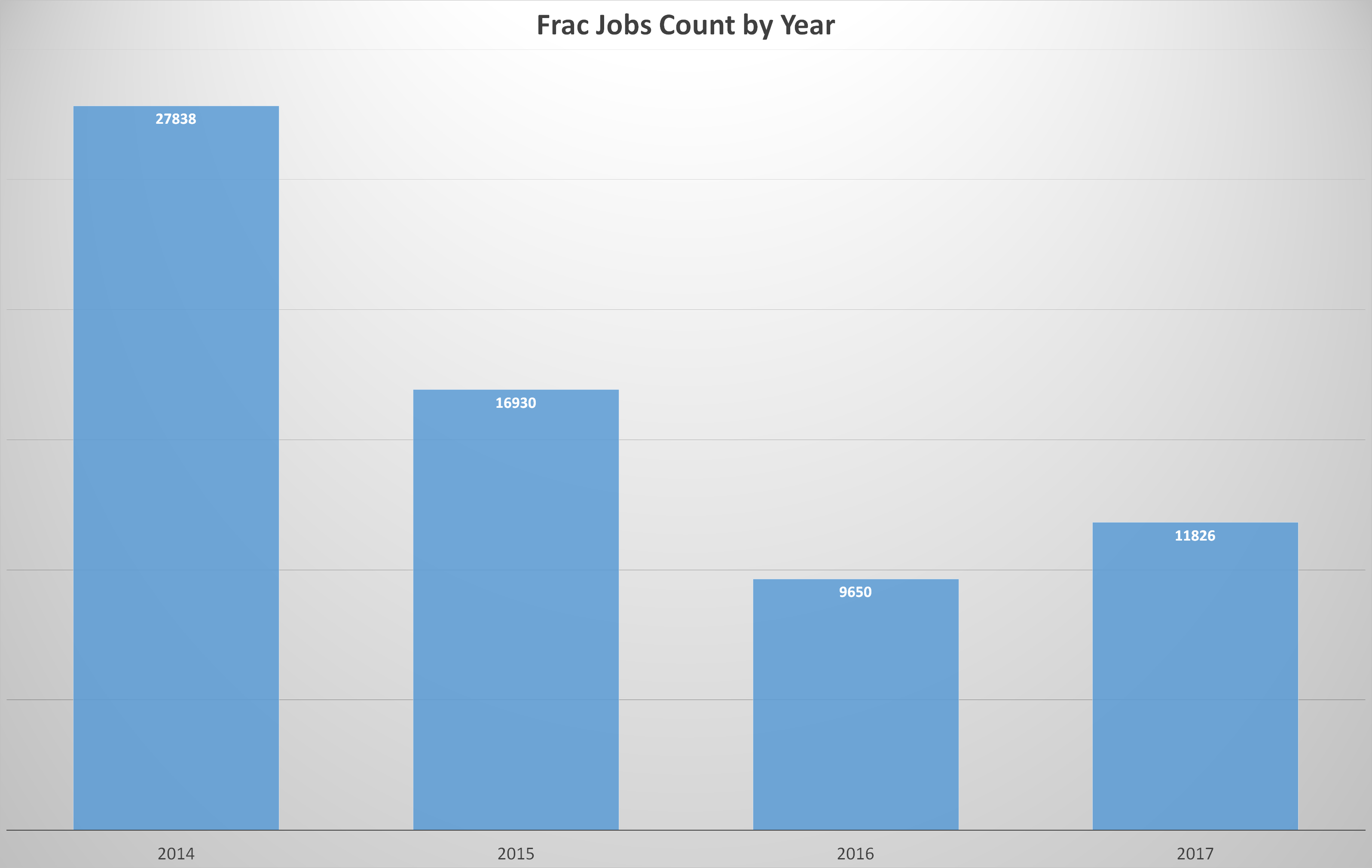 Most government and industry forecasts are overly focused on drilling and fail to properly account for completions.  Their data is also often based on information that is dreadfully out of date, as it can take months for well activity to be reported, if it is at all.  The EIA, for example, now estimates that U.S. crude will hit a record average of 10.6 million barrels per day in 2018 and gas will also hit a record of 80.3 billion cubic feet per day.  We believe these estimates fail to account for the near full deployment of frac spreads. 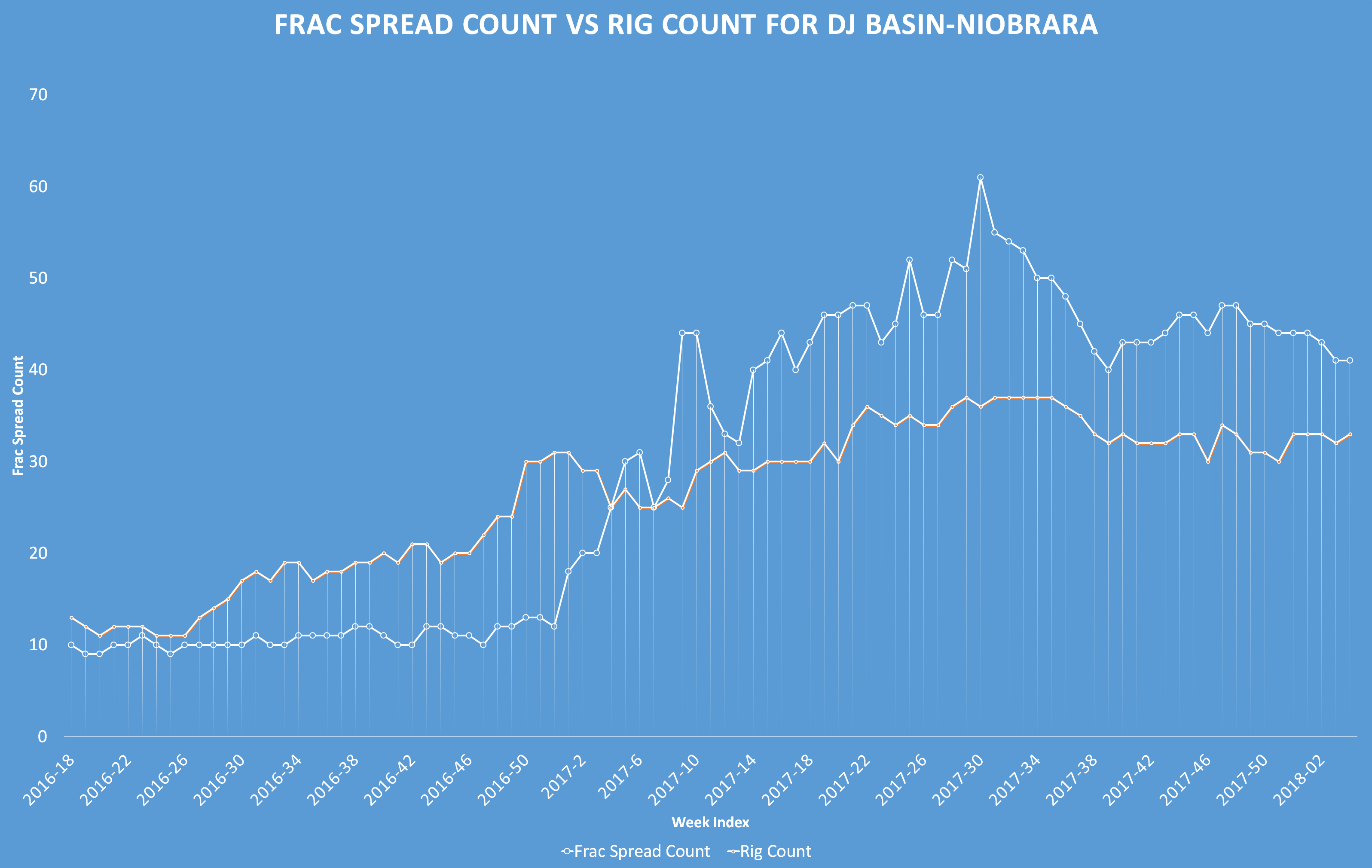 Similar dynamics were at play in the Williston and Utica plays.  We also look for operators to further explore the Duvernay and Montney formations which seem oil-abundant in western Canada.

Our reports are trusted by companies large and small, as they are a unique source of both industry-wide frac’ing activity along with more detailed data focused on each company and each play.  Our proprietary system collects data from countless public and private sources and uses sophisticated techniques to produce real time frac spread counts from this sometimes dated and incomplete data.  We also have detailed data on water, proppant, and chemical usage.  Get in touch with us today to subscribe to our reports or just order a sample.