The Permian Basin is white hot right now and supply is running thin.  As Bloomberg recently reported, the massive shale deposit in western Texas is quickly becoming one of the world’s top producing oil fields.  If the Permian were an OPEC country, it would be the fourth largest and by the end of the year it might leapfrog Iran and be the third-biggest (hypothetical) OPEC nation.

The Permian has boomed in recent years and helped drive down the price of crude both in West Texas and around the world.  Its success comes from excellent geology combined with a prime location in a historically oil-friendly region.  Now improving technology and efficiencies will keep the basin competitive even if oil prices recede.  Plus, recently, one of the strongest players in Permian frac’ing just got bigger.

Concho Resources traces its roots back to 1997, when one of the Permian’s oldest and best known production companies, Parker and Parsley, merged with T. Boone Pickens’ Mesa Petroleum.  One of Parker and Paisley’s executives, Tim Leach, split off and made a number of investments that would eventually become Concho Resources in 2006.  Since then, the company has continued to gobble up assets and rivals in the Permian.

On March 28, Concho announced its latest acquisition, RSP Permian.  RSP is a smaller independent oil and gas company that has focused its efforts exclusively on prime unconventional acreage in the Permian.  As our frac job data shows, RSP is about a third the size of Concho when comparing number of completions.  RSP completed 48 frac jobs last year while Concho completed 144. 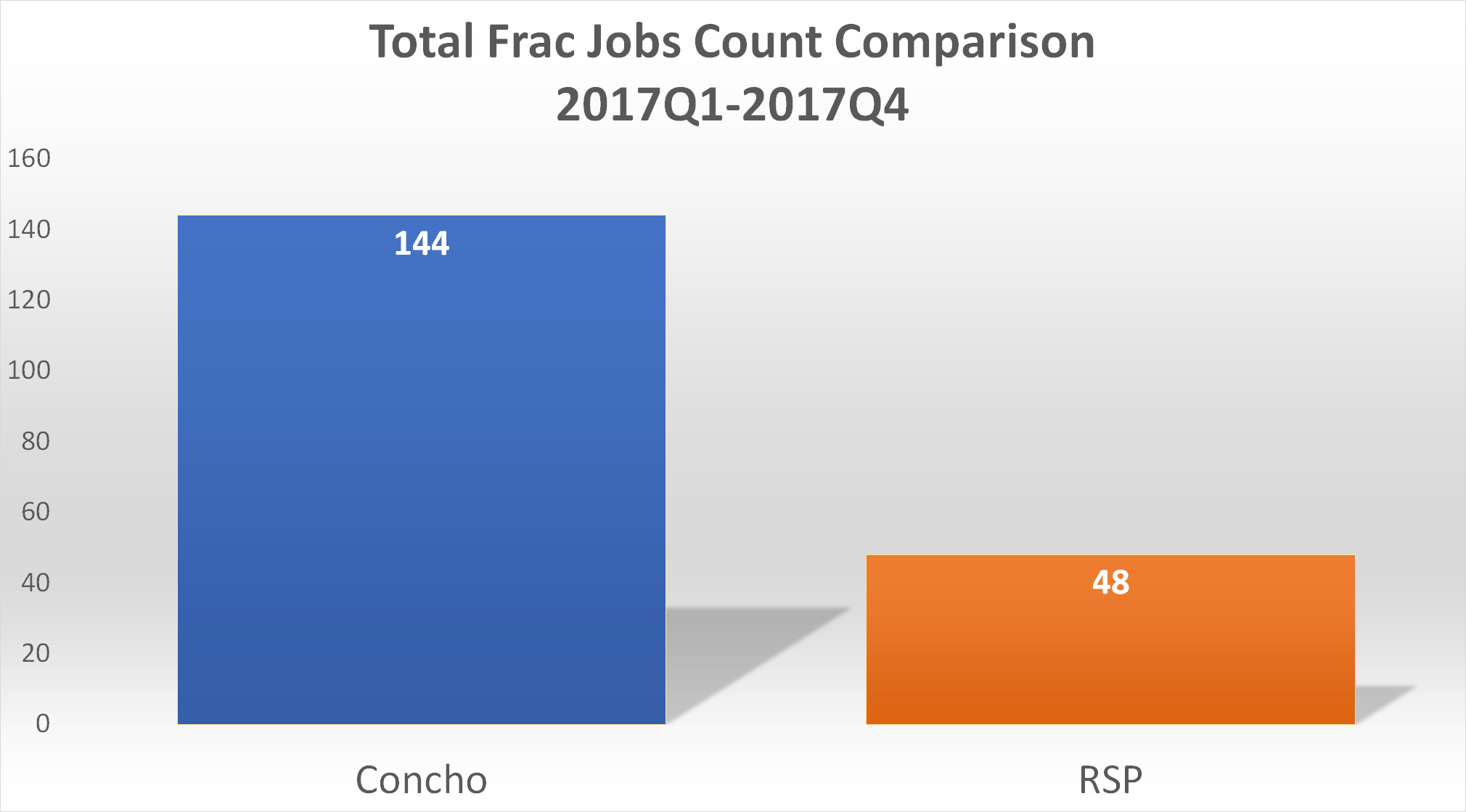 Our proprietary “fractivity report” shows that Concho had 178 frac jobs in the first quarter of 2017, but only 111 in the last quarter.  RSP, on the other hand, had 30 frac jobs in the first quarter, 33 in the second quarter, 66 in the third, and 73 in the final quarter of 2017.  That steady growth no doubt made it a prime acquisition target.  The data in the above charts may have a small lag, but is over 90% complete at press-time. 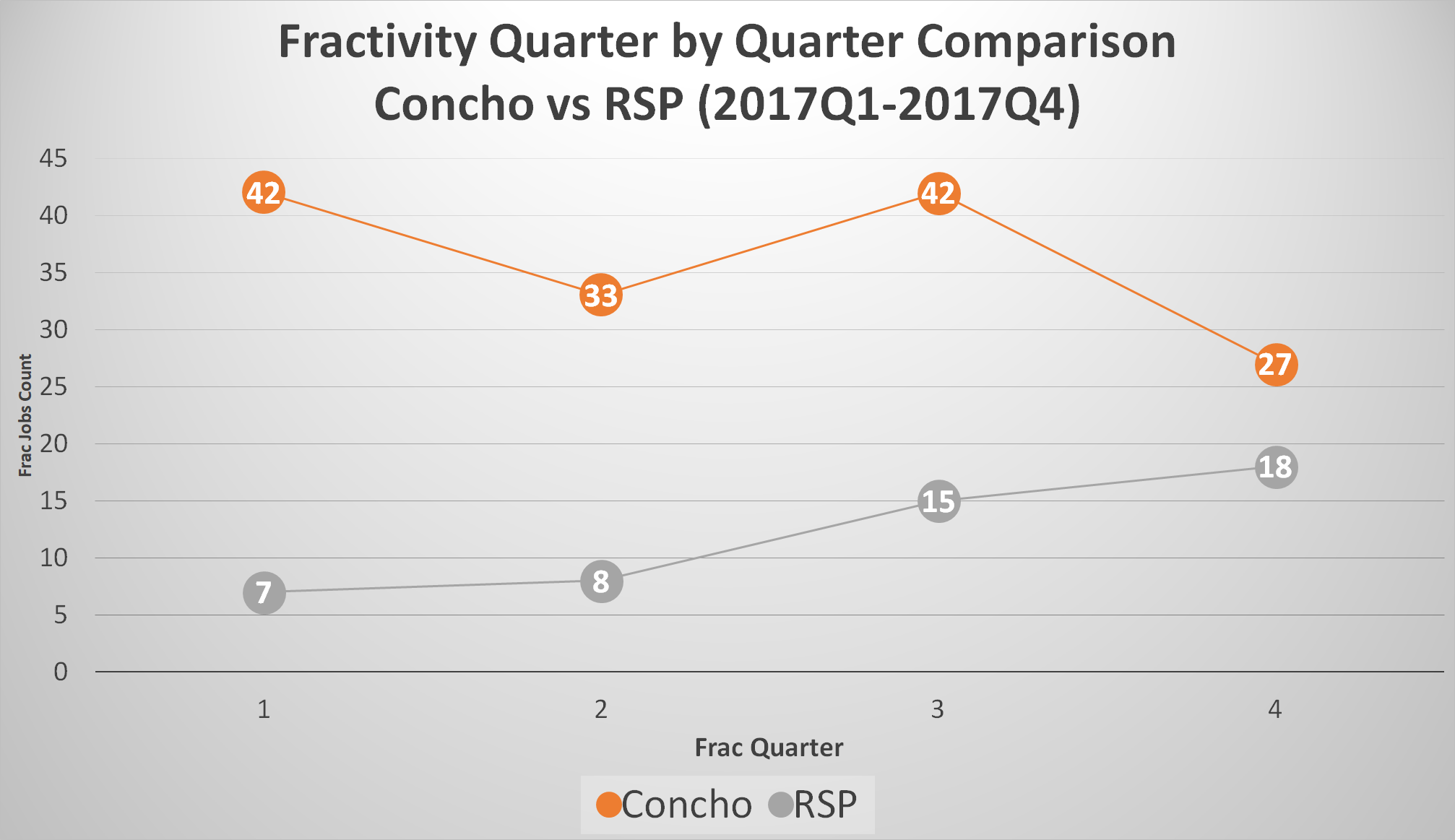 Concho brags that the merger with RSP will reinforce Concho’s position as the largest crude oil and natural gas producer from unconventional shale in the Permian Basin.  The combined company will have approximately ~27 rigs working on 640,000+ net acres of land.  Both companies have historically focused on core Permian assets, making their combined acreage very strong.  Concho says the acquisition will allow it to save money on operations while growing its production faster.

It turns out there is one major service company both Concho and RSP already have in common.  By our estimates, RSP has over 95% of its pumping done by Halliburton while Concho gets about 60% of its pumping from the same company. 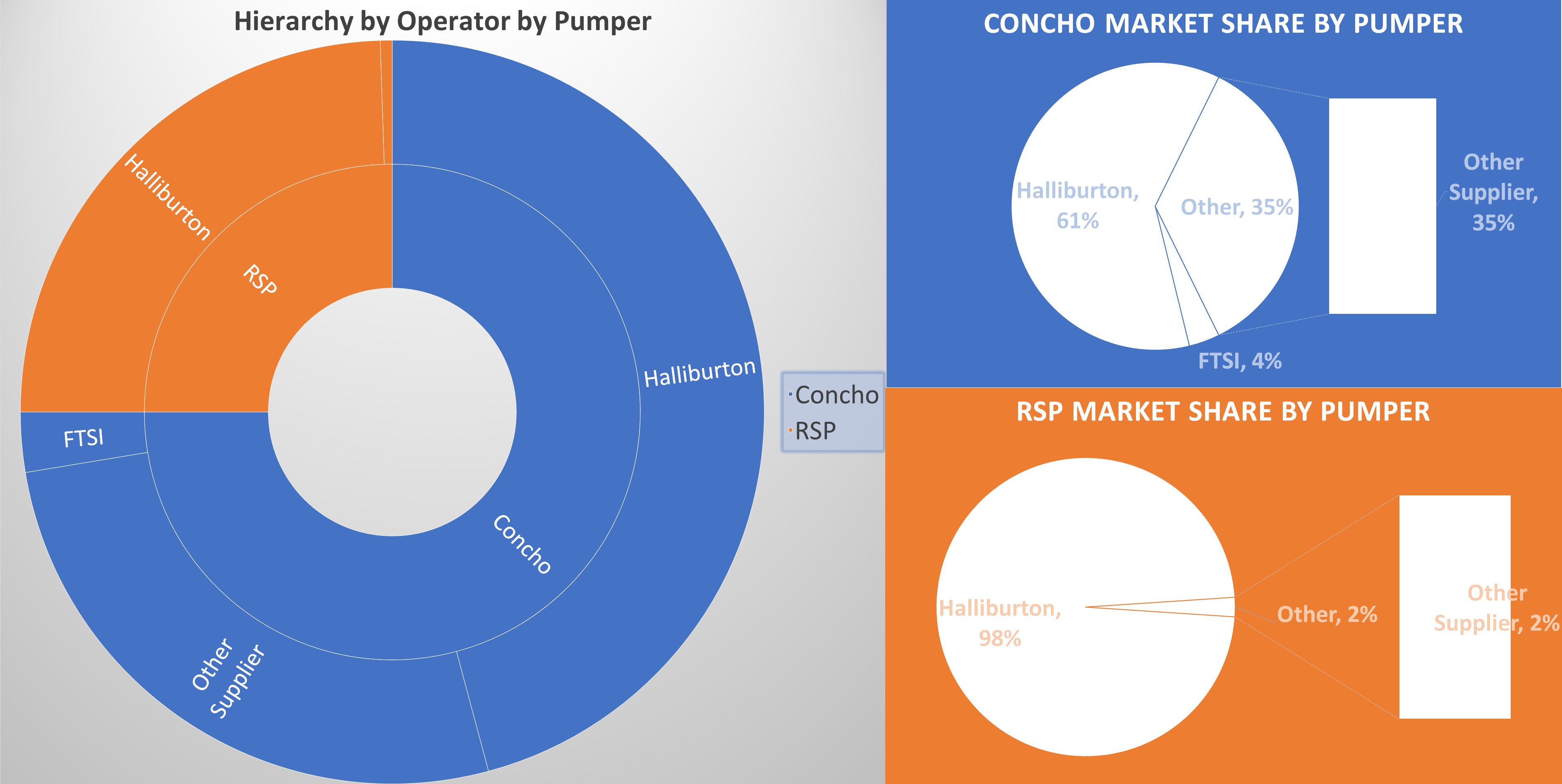 This means that now Concho will get the vast majority of its pumping from Halliburton, and as we previously discussed Halliburton has been aggressive in adding to its frac’ing fleet as both WTI and U.S. production continue to rise. The Concho/RSP combo benefits from the 128 spreads Halliburton has to offer, HALs local Permian Basin infrastructure and long-standing experience as the #1 pressure pumper in the United States.