The U.S. energy market remains under pressure as E&Ps limit activity to remain within CAPEX/ Cash flow guidance. Capital expenditures are coming under pressure with independent oil companies- especially SMID caps limiting activity as crude pricing weighs on earnings. The majors have slowed activity, with only one (XTO) increasing activity in the Permian as other basins see large declines as they compete for internal capital. There is a growing oversupply of light/sweet crude that the U.S. is competing with in the global market. This is a core reason why E&Ps with firm transport and export capacity (Pioneer and Diamondback) or majors that can ship directly to their refiners will outperform. Even for these companies, the oversupply is impacting the curve, which is pricing in the Permian’s Cactus II, Gray Oak, and Epic coming online with a total capacity of about 1.6 million barrels a day. These pipes will have to be filled, and E&P companies will be utilizing their deep drilled by uncompleted (DUC) wells to fill the new capacity. Why fill a pipe into an oversupplied market, and the answer depending on the company 1) take or pay contracts 2) hedges protecting economics 3) control of the full hydrocarbon life cycle.

Haliburton discussed an increased in completed stages and pumping hours, which should continue through 3Q in oily basins while seeing a slow down across the gas regions. This is a tale of two cities as the large oilfield services benefit from a recovering international market, and can be more competitive in NAM while also offering a broad scope of services. Some of the SMID caps that have managed their portfolio (ProPetro) will be able to remain competitive given their targeted approach and relatively young equipment.  Primary Vision has clearly shown the discrepancy between oil and gas, which is projected to continue at least into 4Q. Activity still remains well off 2018 levels and has resulted in multiple spreads/ equipment being stacked. Several of the large oilfield service companies have announced 2Q earnings that are moderate to disappointing with soft guidance going forward as active remains sluggish in NAM. The reduction in activity can be seen in multiple areas, but highlighted in some of the below charts: 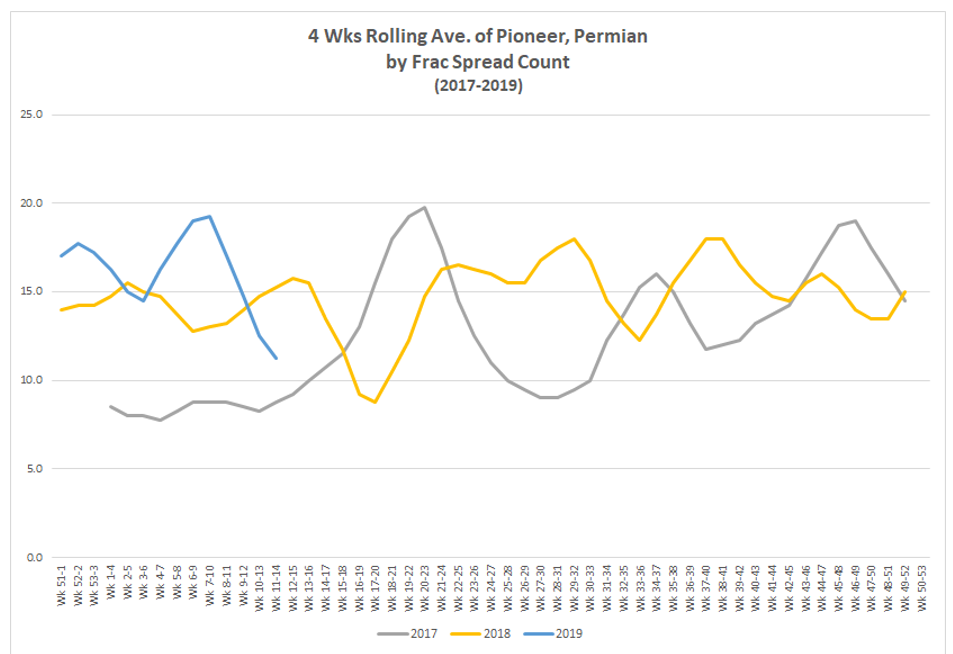 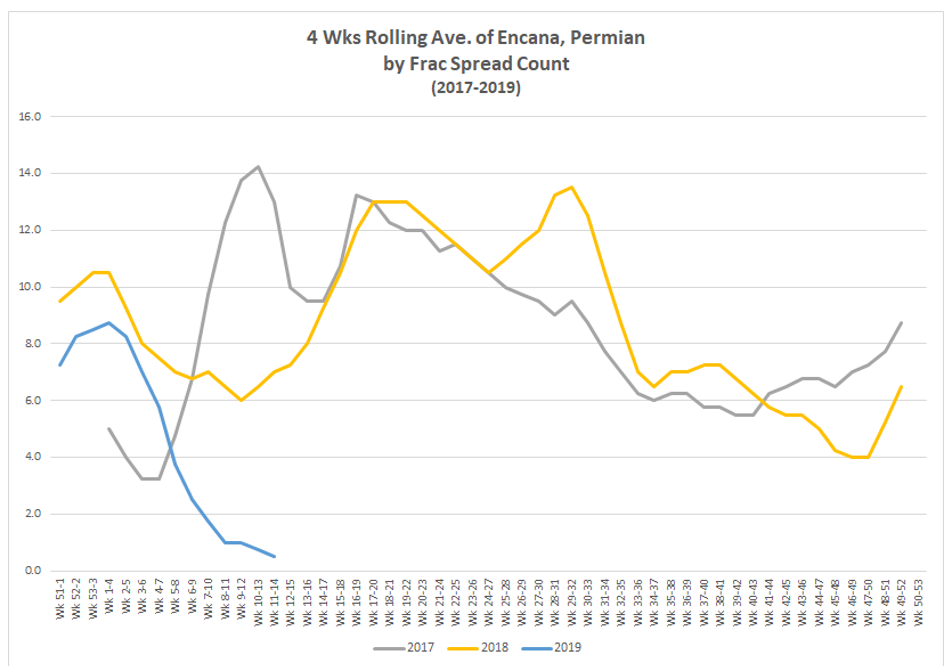 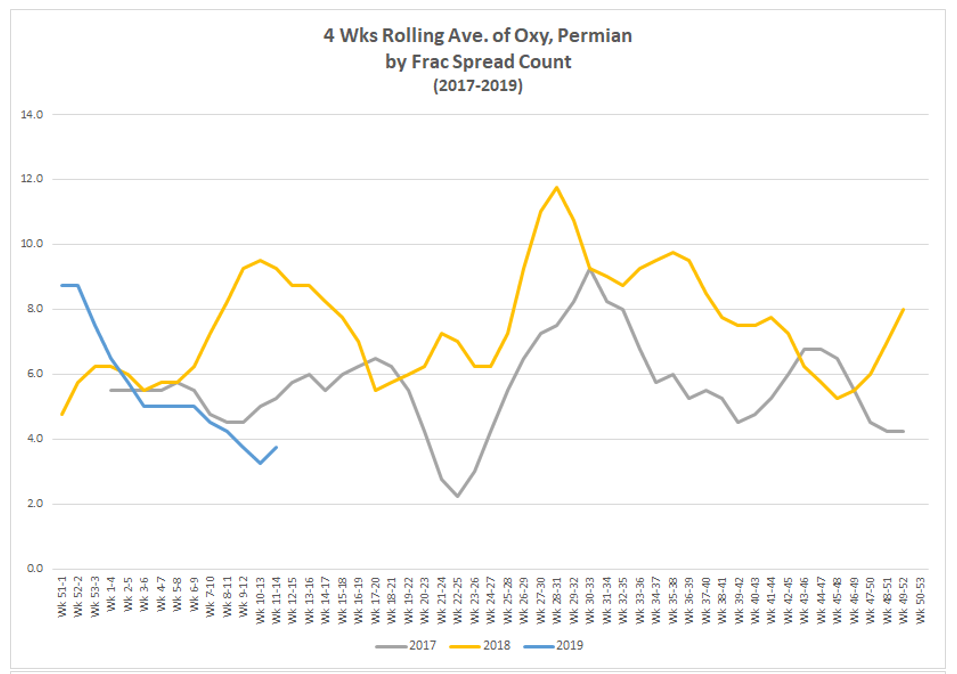 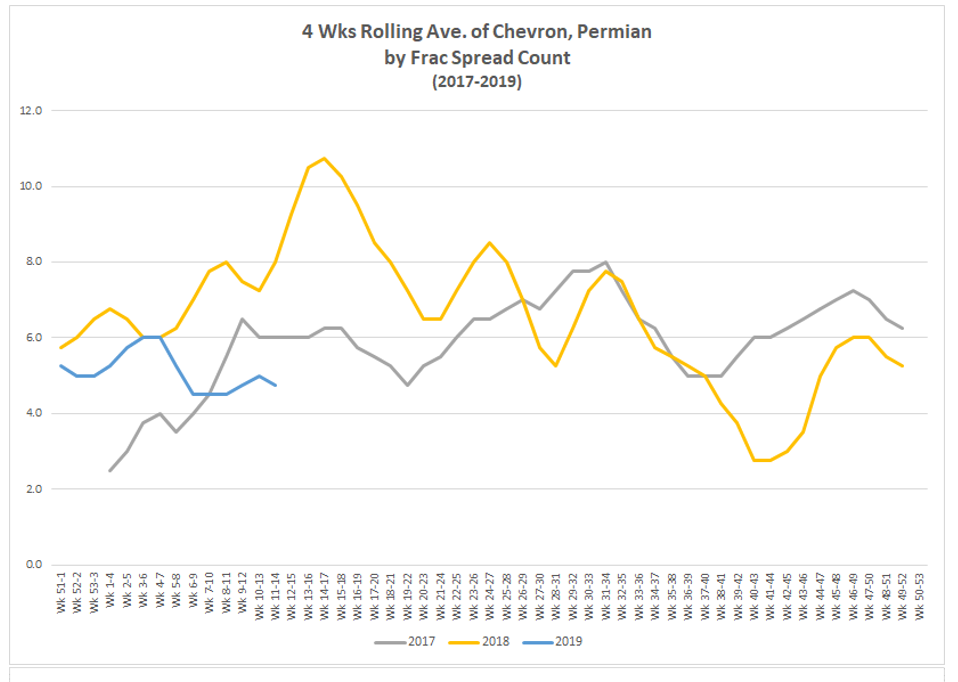 These declines are reflected across multiple basins and operators with only a select few shaking off the trend and seeing an increase in activity. XTO, Cimarex, and Energen are some examples of increases, but these companies have fallen short of absorbing the spare capacity resulting in stacking. By taking equipment off the market, it has helped protect some pricing for companies such as Haliburton- but others haven’t fared so well- such as RPC.

The frac spread count rose into the beginning of July, but has quickly pared back as E&Ps reassess their 2H plans and address issues surrounding CAPEX and cash flow. The below chart helps highlight the seasonality adjustments across the national frac spread.

It will be difficult for other basins to compete for capital within E&Ps as each company looks to stay within cash flow or at least CAPEX guidance. This will keep the Permian active, especially as there are new pipelines coming online to debottleneck some of the region. The natural gas basins will see continued downward pressure as the natural gas curve remains near or below all in break-even costs. It will be difficult to see growth in these areas. The NGL basket price that was helping to support economics in some of these other basins has also weakened hurting completions in areas such as Mid-Con and Eagle Ford. Based on oilfield service guidance, 3Q will see north American completion activity flat to down, but given the increasing pressure on crude pricing- there is more downside risk across all basins. The pipelines coming online will help support some Permian activity, but all the other basins will remain under pressure.

The international market is signaling a growing oversupply-specifically in light sweet crude blends. There are about 30 Nigerian shipments waiting for sale in Sept as weakness spreads through the North Sea and West African slates. Time spreads continue to slip as refiners are concerned about demand as the market prepares to purchase shipments heading into Sept. The market remains skewed following the explosion in Philly and permanent closure of PES’s facility, and Hurricane Barry cutting production, limiting refined product demand, and causing some refiners to reduce runs. The market has started to normalize with more diesel heading to Europe and gasoline to PADD1 (east coast). Weather events tend to be transitory, so this is just a normalizing process post Hurricane as the shuttered U.S. production is already back online, and pressure mounts across crude contracts. Heavy blends remain priced at a premium as the growing number of light, sweet shipments struggle to find an end market. The shortage of heavier barrels has prompted Saudi and Kuwait to find a way to bring back the Neutral Zone. While this is a positive development, the first barrel of oil is still a long way off. The Middle East to China crude tanker rates remain relatively soft as demand numbers continue to disappoint across India and South Korea. The negative Global Economic data keeps coming across Primary Vision’s, export/import data, and shipping information. The below highlights a key issue currently impacting the market- Iran- and the tension that continues to hit the market.

Vessels are now being escorted through the straight to secure the flow of goods.

Iran has escalated tension by taking action against the MV Stena Impero following additional sanctions levied by the U.S. and the Royal Marines seizing Grace 1. Iran can only use guerrilla tactics to impede shipping, but it will be enough to slow flow as every ship will need an escort and/or incur large increases in insurance premiums. The EU had initially announced a potential structure through INSTEX- Instrument in Support of Trade Exchanges (Germany, France, and UK) to get around U.S. sanctions- but Iran has announced it won’t work without a formal oil deal. This is obviously complicated by the fact a key country in INSTEX is the UK, which seized Grace 1. The bargaining position continues to deteriorate as Tehran demands the ability to export 1.5M barrels a day in order to stay in the nuclear deal. The EU can trigger the JCPOA’s dispute settlement process that takes 45 days. If nothing is fixed by the end of the period, the U.N. sanctions come back automatically without China/Russia able to veto. This will be a key topic of discussion on July 15th when the European Foreign Ministers meet in Brussels. The dependence on the Middle East has shifted away from Europe, with more flow heading into Asia- and some key allies of the U.S.

The growth of crude flow initially spiked into Asia as China built out additional chemical/refining assets with two massive facilities- Hengli and Zhejiang- coming online now with capacity of 800k barrels a day. This initial spike has slowed considerably over the last view months as local run cuts have persisted to make way for the large facilities and local demand declines. Chinese National oil companies currently have 50M metric ton export quota for 2019- which has hit regional margins and is likely to increase pressure as exports rise. China is also sitting on a large position of Iranian crude that is currently bonded, but could be outright purchased at any given time- also slowing their total demand needs. Singapore storage was emptied to flow into Europe/US as disruptions rocked PADD 1 between Philly and Irving. This opened the arb from Europe into PADD 1- which as shown below has more than enough supply. Singapore storage continues to fall as product is moved into competing areas and storage needs remain depressed. Product supply across most of Europe remains well over seasonal averages as demand stays soft. Even with new flow coming into PADD 1 (East Coast) from Europe, the data remains bearish as crude storage remains above seasonal norms and demand for product remains weak. The bigger issue will be the shifting flow of refined products as Chinese facilities saturate the Asian markets, and displace large chunks of MENA flow that will back up into Europe. Europe/Lat AM will become the dumping ground for product coming out of MENA, Europe, and the U.S.

Soft refined product demand has been a constant theme that has abated a bit from extremes following the MI receding (ending floods across the Midwest) and supply disruptions across PADD1. Gasoline demand has trended back to the highs, but as we are more than halfway through the driving season and a big disruption hitting with Hurricane Barry- it is hard to see anymore price appreciation in the near term.

The crude story has taken center stage with several factors:

These are items that should have helped tighten the global market, as they all occur during peak demand season. Instead, we are seeing draws slow and build accelerate globally. The bullish points above have been offset by the following overarching themes: 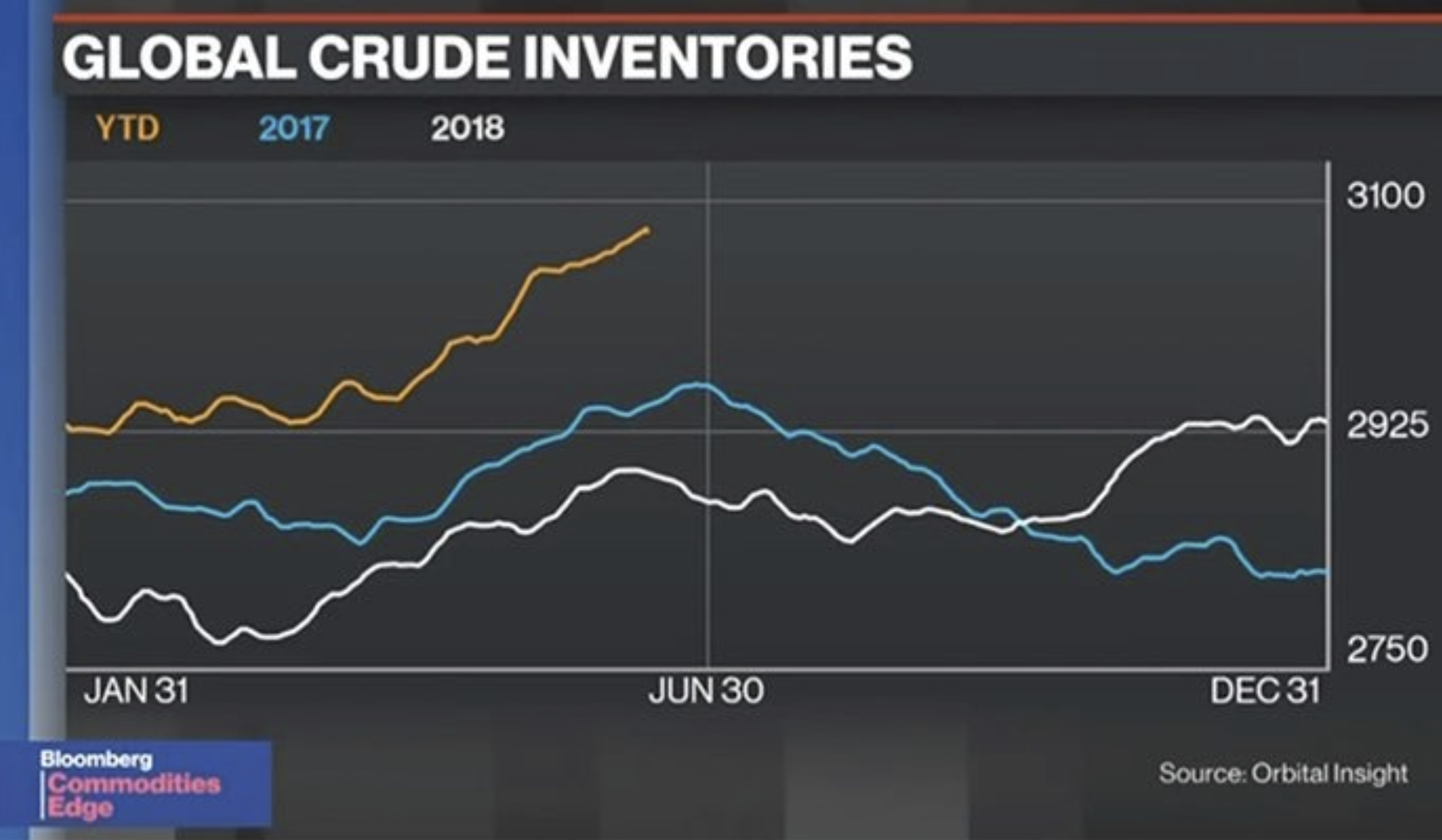