The national frac spread (fsc) continues to decline as work remains slow across the U.S. with noticeable shifts in the Permian, Eagle Ford, and Williston. Realized prices will remain under pressure driven by seasonality (refinery maintenance season), oversupply of refined products, and glut of light/sweet crude in the market. This is all impacting E&P balance sheets driving them to reduce rig counts as well as frac spreads in an attempt to live within cash flow. The below is a breakdown of the slowing activity versus previous years with changes from 8/30 to 9/27 resulting in growing reductions: Permian- 14 / Eagle Ford- 7. These were key locations that should have seen stable activity as pipelines came online in the Permian, and the Eagle Ford filters into the LLS (Louisiana Light Sweet) market, which should have been strong with the Saudi Arabia attack. Instead, the Permian pipelines were filled with capacity competing for space on other lines, oil behind pipe, and current operational spreads. The U.S. exports did rise, and will be reflected in next week’s EIA report, but the total number still remains underwhelming given the expected impact of the global supply chain disruption. Typically, E&Ps will increase activity by bringing on more completion crews from now until Thanksgiving, instead- we expect a stabilization where national spreads hover around 375 versus the normal rise.

The chart below highlights how this is the longest slow period without an uptick in frac spreads since Primary Vision began collecting data. Based on the current available data, there could be a decline to about 375 before there is a bounce in activity. Either way- the data highlights the limited activity across the U.S, which will stabilize at these levels over the next two weeks. The pressure on crude, natural gas, and natural gas liquid pricing will keep activity muted across the U.S. Weak natural gas prices has already sent the Utica and Haynesville to historic lows, while the Marcellus sees the most stable activity driven by low breakeven costs. Robust NGL pricing helped support activity throughout 2018, but current pricing pressure has limited activity in several basins including the Mid-Con and Utica. There is a lot of pent-up demand for natural gas liquids in the global market, but the U.S. lacks the effective infrastructure to get it to market in a cost effective manner. This is quickly being addressed, but it will take time to bring the new coastal facilities online. LPG demand has risen globally, and the recent disruption caused by the Saudi Arabia attack has sent countries throughout the world, scrambling to replace the lost cargoes. The U.S. is in position to be the swing producer of NGLs, but that is still 24+ months away, so the rise in global NGL pricing won’t translate to rising frac spreads in the near term. As the energy financial markets struggle, there will be limitations on the available capital for struggling companies to issue equity or debt. The degrading balance sheets of many service and E&P companies will keep activity low, and as hedges roll off activity will continue to decline in an attempt to preserve cash.

Soft demand for U.S. oil will continue as domestic and international refinery utilization rates decline during typical maintenance season. The U.S. decline in utilization rates is currently below the 5-year average- per the chart below. This is on the back of slowing U.S. product demand along seasonal norms, pressure in the export market for refined products, and expected product builds. The limitations in the European markets and muted Latin American demand has kept a lid on U.S. exports, which has pushed domestic refiners to slow down activity further than normal. European refiners are also in turn around, and this is typically a time when the arb opens up for distillate from the U.S. to Europe. Instead, the European markets are being fed by a glut of distillate originating from West Africa and Asia.

The international market is signaling additional headwinds for U.S. crude and products that will persist throughout the remainder of the year. There was a big disruption in the market when the third largest oil producer in the world was attacked, and any premium left in the oil market from the supply shakeup has evaporated. This is driven by demand that continues to fall as indicated by economic markers globally, and an oversupply of light/sweet crude in the market that quickly backfilled the disruption. The persistent pressure on crude demand is also at the crux of Saudi Aramaco’s drive to sign on long term crude deals to solidify their placement of KSA oil in countries, such as India and China. The oversupply of light/sweet crude in the market will continue to pressure U.S. exports in a world experiencing a slow-down in total demand.

Several recent events have shifted crude movements around the world. 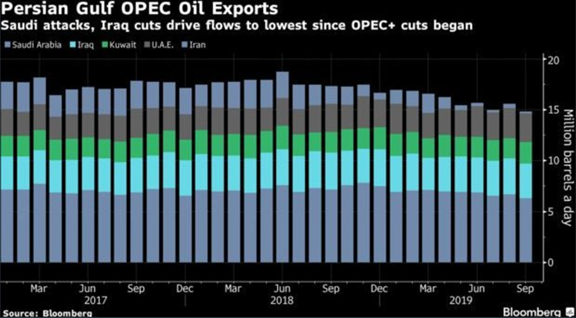