We’re releasing for free our Primary Vision Frac basin maps. Feel free to use them for an upcoming presentation, backdrop on your computer or if you’re looking for something to printout.  Soon we’ll give you the ability to download these from our website in high Definition. Canada is almost ready and will be released next week.

What’s your favorite Basin to work in?  Least favorite?  let us know in the comments below. 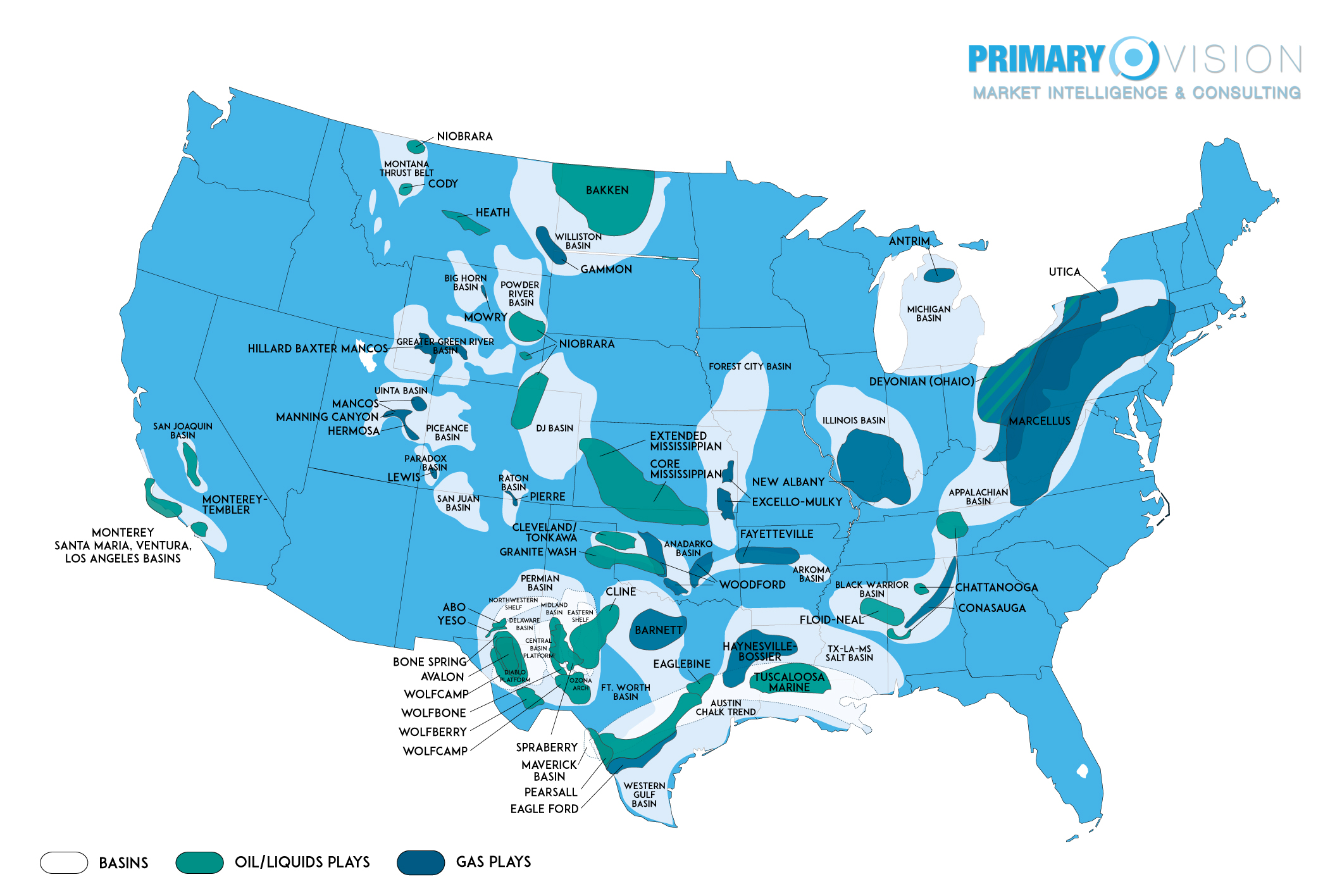 THE MOST RECENT OFFERING FROM US AT PRIMARY VISION IS THE FRAC SPREAD COUNT REPORT, WHICH OFFERS BOTH WEEKLY UPDATES ON PROJECTED ACTIVITY AND ACCESS TO OUR HISTORICAL DATA.  CUSTOMERS CAN GET THE INFORMATION IN TOP-LINE CHARTS THAT CAN BE EASILY DIGESTED OR THROUGH THE REAMS OF MORE GRANULAR DATA THAT WE ALSO SUPPLY.  YOU CAN SUBSCRIBE TO OUR REPORT AT WWW.FRACSPREADCOUNT.COM.  YOU CAN ALSO CONTACT AT INFO@PVMIC.COM FOR MORE INFORMATION OR A DEMONSTRATION ON HOW OUR PRODUCTS CAN HELP YOUR BUSINESS.

In today’s post, we discuss natural gas prices, frac activity levels, and some recent acquisitions and divestments in the Marcellus.

Natural gas prices at some market hubs in the Appalcahian Basin have been trading at negative differentials relative to spot prices at the Henry Hub, considered the “New York Stock Exchange of Natural Gas.” This has been driven by a supply glut and take-away pipeline capacity constraints. Natural gas production from the Marcellus shale has increased from approximately 5.0 Bcf/day in January 2012 to roughly 13.6 Bcf/d at present, according to research from EIA’s Natural Gas Weekly Update illustrates. 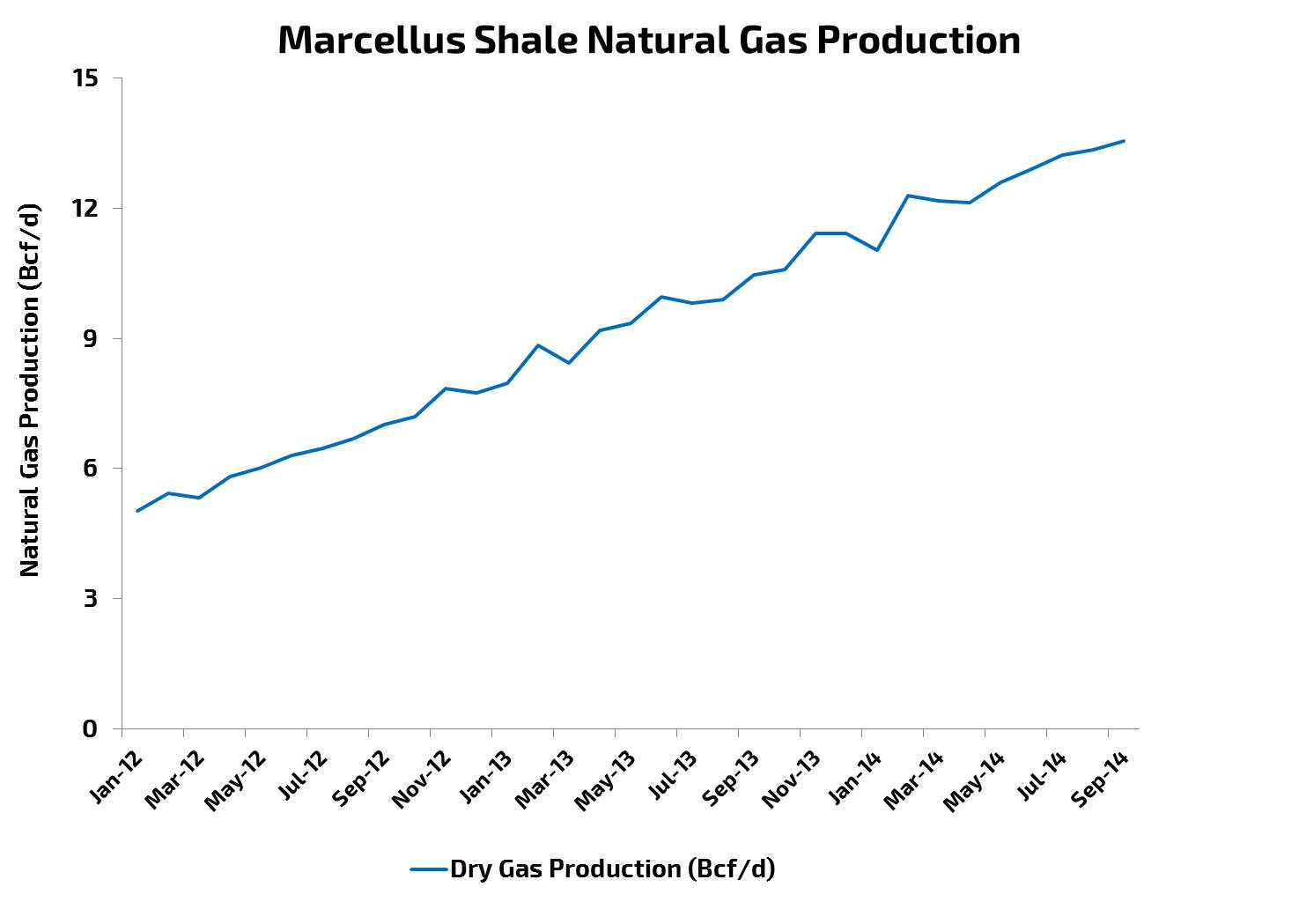 Take-away pipeline capacity, especially in Northern Pennsylvania, was unable to keep pace with rising production. The divergence of spot prices can be traced back to mid-2012. Several new interstate and intrastate pipeline projects in different stages of development will deliver natural gas flows to other markets, including the Southeast US. These developments should mitigate the supply backup that has exerted downward pricing pressure. An exception to these regional market dynamics has been the TCO Pool, one of the Appalachian hubs where pricing has kept close parity to Henry Hub prices due its ability to back out deliveries from Gulf Coast sources and its pipeline connections that provide access to several markets. 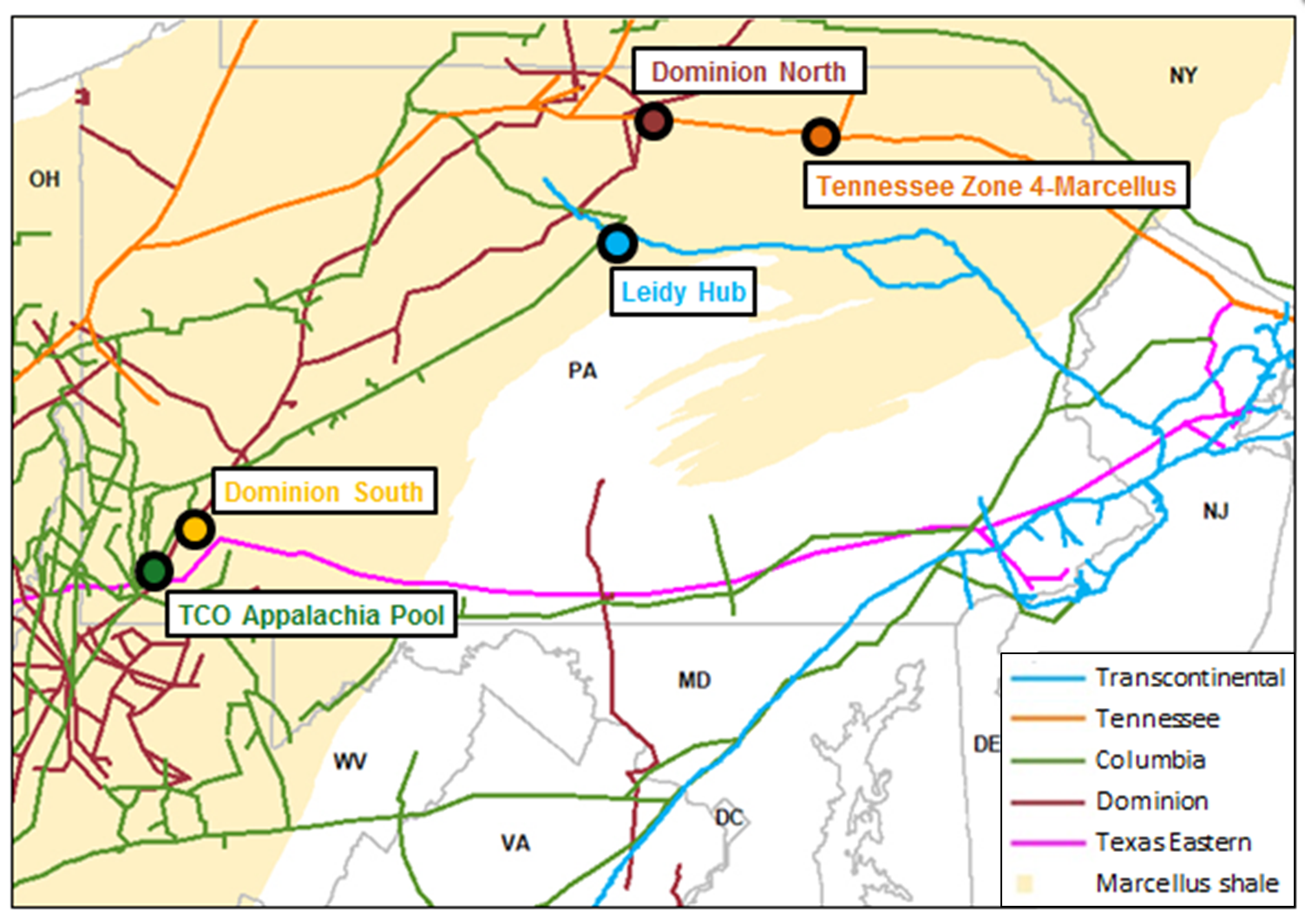 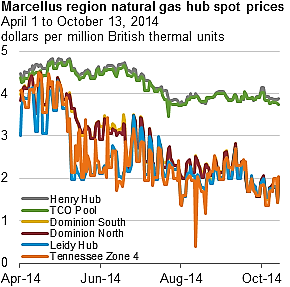 Facing these challenging dynamics, certain operators have decreased activity levels during 2014 relative to 2012 and/or 2013 levels, including Chesapeake (as further detailed below), XTO/ExxonMobil, EOG Resources, EXCO Resources, and WPX.

Royal Dutch Shell, which has been reshuffling its US Land unconventional oil and gas portfolio in an effort to shore up its balance sheet, has announced a few transactions of late in the Appalachian Basin. Rex Energy acquired 208,000 gross (207,000 net) acres from Shell in a deal announced on August 12, 2014. The $120 million all-cash transaction added significantly to Rex’s asset base in a liquids-rich area covering Armstrong, Beaver, Butler, Lawrence, Mercer and Venango counties in western/southwestern Pennsylvania and Columbiana and Mahoning counties in northeastern Ohio. Two days after details of the transaction with Rex were made public, Shell announced two separate transactions, including a “swap” with Ultra Petroleum. The deal with Ultra involves Shell selling its 100% interest in conventional natural gas assets in the Pinedale Anticline in Wyoming in exchange for 155,000 net acres in the Marcellus and Utica as well as $925 million cash. Interestingly, the Supermajor describes these newly-acquired assets in northcentral Pennsylvania as “highly attractive exploration acreage” rather than clearly-delineated development acreage. The second transaction announced involves Shell selling 100% of its Haynesville shale assets in Louisiana, including associated field facilities and infrastructure, to Vine Oil & Gas LP and its financial sponsor, the Blackstone Group, for $1.2 billion. Shell appears to simultaneously be demonstrating its belief in the long-term value proposition of the Marcellus and Utica, but appears more inclined to focus on dry gas production instead of what may be for the operator less economic wet gas production. Either way, Shell’s well construction costs in the Appalachian Basin are certainly lower than in its recently-divested dry gas Haynesville assets. It will be interesting to see how Shell’s plans and regional natural gas prices will affect its medium- and long-term returns.

Similar to major basins across US Land, many operators active in the Marcellus have managed to bring well costs down due to increased drilling and completion efficiency, driven primarily by the more common practice and larger scale of multi-well pad operations. E&Ps have also managed to exert pricing leverage on vendors, particularly frac services providers that are competing in a market oversupplied with pressure pumping capacity. Recent commodity price weakness has been well-document in the news, but operators such as Occidental Petroleum and oilfield service providers such as Halliburton remain optimistic and report that activity levels recently have not materially changed.

In Part 2 of our analysis on the Marcellus, we will discuss proppant market trends. Stay tuned!