Oil prices are inching upwards, and if you want to make the most out of the opportunities in unconventional oil and gas production you need to know the lay of the land.  Primary Vision has just the product for you.  We leveraged our computing, qualitative analysis, and artificial intelligence capabilities to create an encyclopedia of frac’ing data on operations across the continental U.S. and Alberta, Canada.

Our market intelligence and counseling company has been supplying data and data derivative products to the oil and gas industry since 2012.  We strive to give our customers the information they need to find markets, lower their costs, and raise their revenues in this challenging marketplace.  Our customers come to us to know what is happening in the oil field, and we give them a range of value-added data on the use of water, proppant, and chemicals in hydraulic fracturing.  Oilfield data is, of course, invaluable to upstream companies but it also impacts companies throughout the value chain.

That is why our Products have been trusted by leading companies from a diverse range of sectors, including Schlumberger, BP, Bloomberg, Shell, PWC, Phillips, HSBC, Cameron, Honeywell, XTO, EOG, and DuPont.  Proppant companies have used our reports to gain intelligence about their market, hedge funds have used our data to augment their own analysis of publically-traded companies, and private equity firms have used us to study a handful of Permian Basin counties for future investment.

Methodology Behind our Latest Report

In developing our reports, we target only the richest oil and gas data sets.  Our software tools and validation process are proprietary, but we can say that we rely on collecting a broad swath of industry reports, regulatory filings, and publicly-released information.  The biggest challenge with this data is that operators and pumpers in most locations make regulatory filings only every 90 days or so, and there is often a delay in that data becoming public.  We strive to close that Data lag with our own predictive model.

Our model relies on collecting data from a range of industry sources and rigorously testing it through business rules and logic to ensure our data sets and forecasts are as accurate as possible.  Our proprietary system was developed by a team of leading crude oil analysts paired with professors at Oxford University.  We are using modern math models, advanced cross-validation algorithms, and artificial intelligence to constantly test and refine our process.

Along with developing these massive data sets, we work on presenting the data for our clients in the most useful way.  We have charts that combine actual spread data with our predictive algorithm, and we also have charts that break actual data from predicted data.  We find some clients want our best estimate at what is happening and others want to see a breakout of what activity is confirmed.

Our recently-released Frac Spread Count Report is one of the most comprehensive products we have ever Released. Demand has been off the charts, as we combine easy-to-read top-line charts with more than 400 pages of more granular data.  You can subscribe to our report at www.fracspreadcount.com.  Subscribers get both a weekly update on the frac spread and access to historical data.  If you have questions about our products or would like a demonstration on how they can help your business, feel free to contact us at info@pvmic.com.

It has been a rough couple of years for the oil and gas business.  Oil prices dropped sharply in recent months as America’s boom in unconventional production ran headlong into supply headwinds, but the once-mighty Organization of Petroleum Exporting Countries has done American producers a favor this time.  On November 30 the group announced its first cuts in eight years which would reduce its production by about 1.2 million to 32.5 million barrels per day.  The cuts were something U.S. oil workers have been hoping for, and oil prices have indeed shot up and set the industry up for a great new year.  Let us tell you about a couple developments we are watching and a potential stocking stuffer for the frac’er in your home.

Baker Hughes Backs Out of the Pressure Pumping Business

In 2009, Baker Hughes, a GE company, purchased Houston-based BJ Services Co. for $5.5 billion dollars.  B.J Services was an oil and gas services company that traces its roots back to 1872 and by the time it was purchased it was one of the world’s leading providers of oilfield pressure pumping services.  Baker Hughes bought the company to expand its footprint in the frac’ing business, but the deal proved to be a financial drag.  Its frac spreads went from a peak of around 50 in 2015 to just 10 earlier this year, though they have come back some recently. 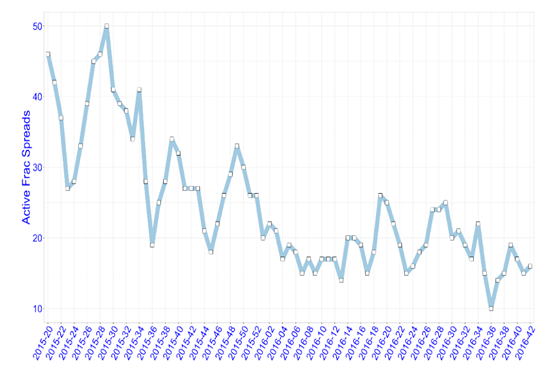 Baker Hughes Frac Spread Count Since May of 2015

Baker Hughes is now in the midst of a merger with a unit of General Electric and on November 29, Baker Hughes announced it was spinning off its BJ Services assets. Baker Hughes is partnering with CSL Capital Management and West Street Energy Partners to create a “pure-play North American land pressure pumping company” known as the new “BJ Services.” It will be interesting to watch how aggressive Halliburton and Schlumberger are in trying to snap up more market share away from this new entity.

Signs of Rock Bottom for Weatherford

Weatherford International has taken the downturn especially hard.  Back in April 2015 the company kicked things off with 10,000 layoffs and 60 facility closings.  The company was doing okay in the Middle East, North Africa, and Asia Pacific at the time, but its North American assets were hemorrhaging money.  By October 2015, the company was ratcheting up to laying off 14,000 worldwide after its revenue was cut almost in half from $3.9 billion in the third quarter of 2014 to $2.2 billion in the third quarter of 2015.  By November 2016, the company’s CEO Bernard Durok-Danner was out of a job, leading to a 33% spike in the company’s stock price.  He was blamed for over leveraging the company to the point where it could not handle its debt after an oil price decline.

Now, new CEO Krishna Shivram has been scaling back its frac’ing operations and may get out of the frac’ing business entirely.  If true, that will be a boon for the remaining service providers.  The company’s frac spread count cratered in the downturn and has been hovering below ten for most of the year.  The company may have arrived at a point where it decides to focus on other parts of its diverse portfolio. 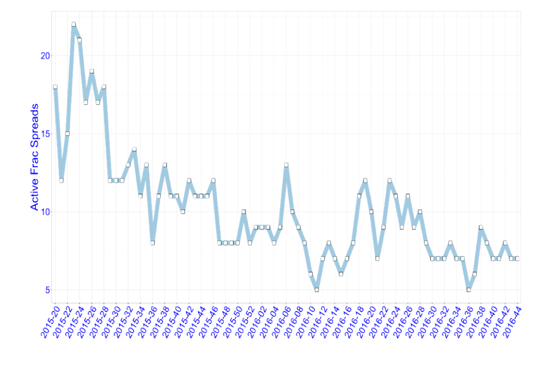 Weatherford Frac Spread Count Since May of 2015

If you want to make money in the oil business right now, you need to know who among these battered rivals will rise from the downturn to take advantage of OPEC’s gift. Halliburton remains dominant at ~34% of the pressure pumper market, while Schlumberger sits at 12%. Baker Hughes 9% market share will presumably all go to the new BJ Services while Weatherford’s 5% appears to have an uncertain future. 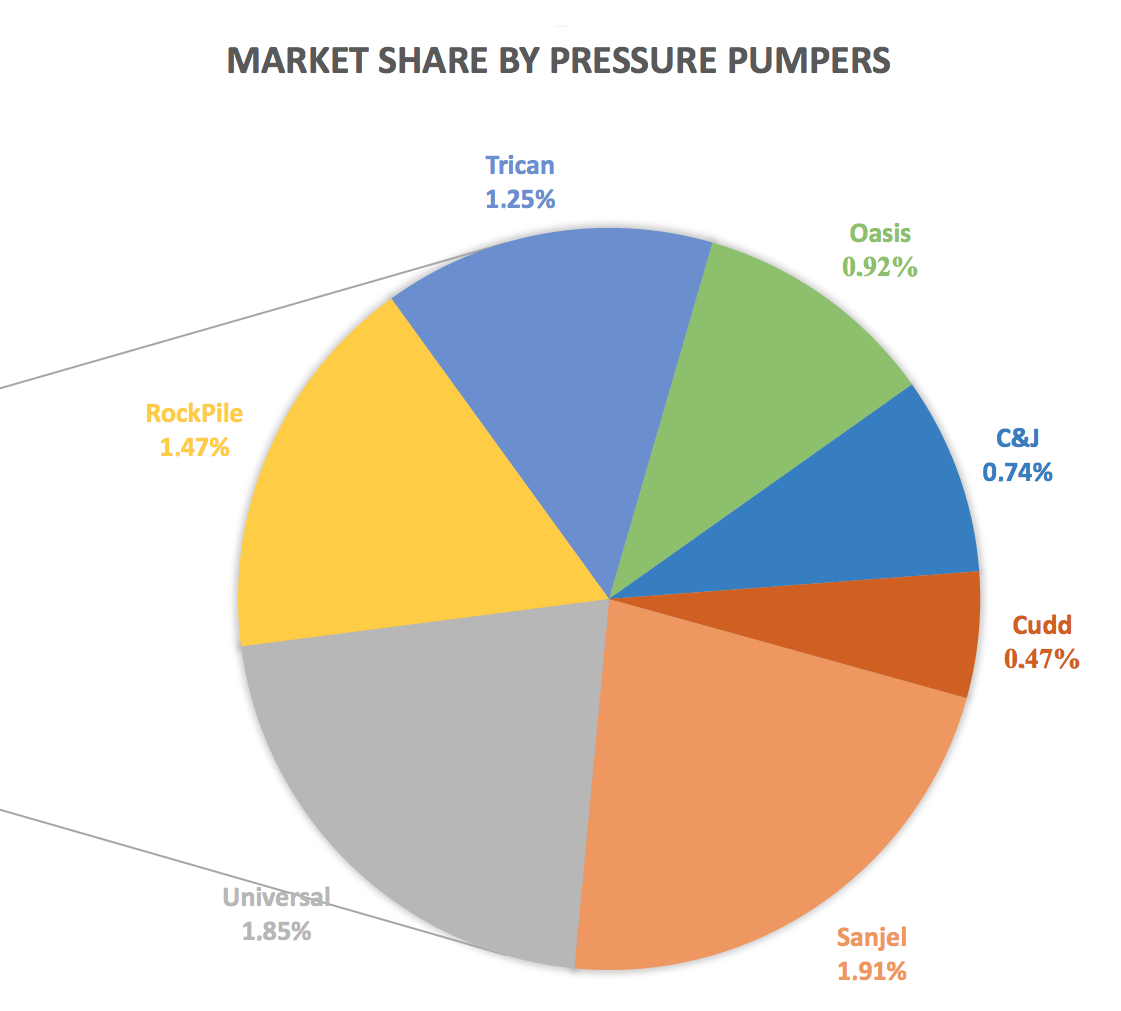 A portion of a chart that covers pressure pumper market share from our Frac Spread Count Report.

You can be the first to know what happens with our inaugural Frac Spread Count Report. We have been tracking onshore frac’ing activity for five years and now we are releasing our first report about active operators and pressure pumpers in the lower 48 states and Alberta, Canada. It is over 500 pages long and includes the count plus our expert forecasting, analysis, heat maps, details on regional activities, and charts on Permian Basin action. We also list out the top operators, service companies, and active counties.

You can GET the report today at: www.fracspreadcount.com

Questions? Email us at: info@pvmic.com