Primary Vision has been working hard to improve our ReFrac report offering.  We’ve added some additional charts for you focused on the Permian Basin, changed some charts that were hard to read, added a printable version, upgraded our delivery method from an attachment to a link, etc. etc.  A lot of changes that required a lot of testing and we’re not gonna stop there.  Look for us to add in additional analytics, chemicals and production before the end of the year. 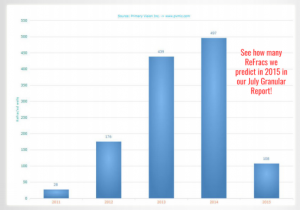 side note: We’re also looking to add an account based system as well as additional reports (hint: Frac Fleet report)

In addition to our reports, we’re going to soon be adding production data, additional completions data and making our trek to the great white north (yes, Canada)!  All a part of the continued evolution of our comprehensive U.S. frac data products.

Some time this week we’re going to release a survey on our refrac report and a bit about what’s important to you frac data-wise.  Should be super easy, ten questions or less.  Thanks in advance!

Still thinking about ordering our Granular ReFrac Report?  Get July’s instantly and be setup for August where we’ll focus on the Barnett and maybe one additional surprise. You’ll have to subscribe to find out! 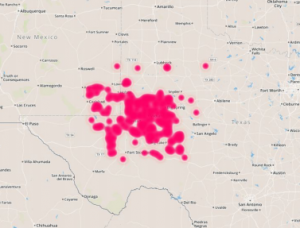 Summer is half way over, get outside!

The rig count has gone up for the first time in 2015 and more permits were issued last week than in any week since February. Good news?  Kinda!

The grass is fairly green here as we move past the half way point of 2015 and boy is the refrac market heating up!

According to Forbes “1 in 2” frac’ed wells in the United States are candidates to be refrac’ed.

According to our frac records that is almost 50,000 candidate wells!

Halliburton and Schlumberger seem to be gearing up technically and financially to make a big splash into refracs in the second half of 2015.

Let that sink in a second…

All of these questions have been asked to Primary Vision in the last month! We can help you and your team learn more about the buzzy topic, so lets get started with our June report right now.

Next month we’ll cover the Permian Basin and soon be releasing our second report based around pressure pumpers. Things are getting exciting!

Want to get on the early bird list for that? Email me at mjohnson@pvmic.com