Just a few weeks ago, we updated you that Halliburton was putting more equipment to work than was being reported in the media.  Now we are revising our estimates even higher after uncovering new data on the company’s activities.

The company just reported a 34% revenue jump in the first quarter of 2018, a jump the company largely attributed to higher demand in North America.  Rising oil prices certainly helped as well.  CEO Jeff Miller said on an April 23 call that the company is also benefiting from a “tightness” in the hydraulic fracturing market.  In fact, fracking spreads across North America are virtually “sold out” at the moment.  Primary Vision agrees with this statement as we discussed supply with the Wall Street Journal just this past week.

He said that high fracking equipment utilization rates are both limiting supply and degrading existing equipment.  He also pointed out that the ratio of rig counts to frac spreads has narrowed from 4:1 to 2:1, something we know that analysts are watching closely.  Are we getting more efficient or wearing down gear at an accelerated rate?

Halliburton Is Deploying Assets Into This “Tight” Market

Mr. Miller has a good reason to be confident in his company’s ability to continue to thrive after posting a solid profit to begin 2018.  For one thing, he noted that the company’s new Q10 pumps are able to hold up to the rigors now facing the industry.  As we reported previously, Halliburton has been responding to the industry upswing by both putting newer Q10 frac pumps into the market and also reactivating older systems that were “cold stacked” following the 2014 price crash.

We are revising our estimates today to reflect our new findings that Halliburton has activated 15 additional frac spreads in the first quarter of 2018.  That means we believe the company now has 128 marketed spreads instead of our previous estimate of 113.  Our overall marketed horsepower estimates are also increased to 4.6 million from 4.2 million.

Our estimates are built on a proprietary system that analyzes numerous target sources, but Halliburton’s “fractivity report” over the past year shows that their activity has been growing steadily (ignore the dip in recent months, as the data has a natural lag of about 12 weeks that we compensate for in our estimates). 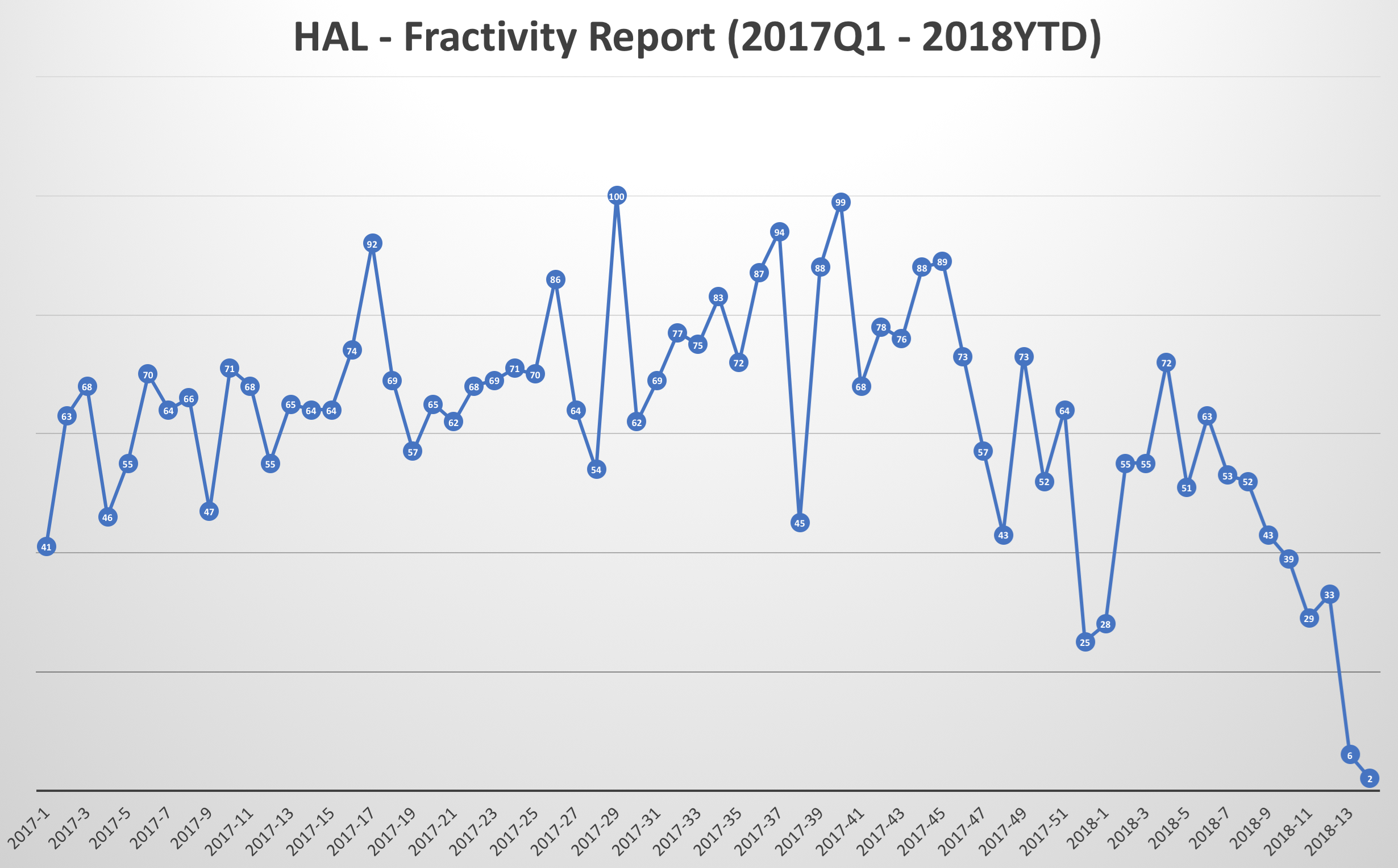 Primary Vision is a leading supplier of data on hydraulic fracturing equipment activity in the United States.  Contact us to purchase access to more detailed information, and stay tuned for insights into the recent merger announcement by Concho Resources and RSP Permian.