Plains All American’s Texas Cactus II pipeline is tracking on schedule with partial service in late 3Q with full service by 1Q, as pipeline capacity expands to 670k b/d from the original 585k b/d. The differential between WTI Midland and WTI Cushing has normalized to shipping costs as refiners have ramped activity and exports have been hitting close to 3M barrels a day. Refiner utilization rates have recovered to 94.2%- inline with seasonal averages. Imports dipped across the complex, but are set to rise as Brent pricing softens due to weak demand abroad as other regions are forced to roll out economic run cuts (specifically in Asia). The U.S. will be able to maintain market share in Lat America as more Middle East and Asian product flows into Europe. This will challenge the arb from the U.S. Gulf into Europe, but maintain activity into Lat Am along seasonal averages. Another shifting dynamic is the shut down of the refiner in Philly following the explosion, which will pull more product from Europe into PADD 1 (East Coast).

Rig activity continues to trend lower as E&Ps focus on the reduction of drilled but uncompleted wells to maintain cost in a volatile pricing market. The forecast for frac spreads remains off the 2018 pace with an expectation of about 450 spreads (which will slowly trend higher) and a rolling average of about 452. Activity in the Utica and Marcellus will continue to slow as natural gas pricing remains under significant pressure. The Permian and Eagle Ford will be the most active, with activity in the Eagle Ford remaining below seasonal averages as the Permian slowly increase activity over the next several weeks pushing the national average higher.

The volatility in crude pricing and uncertainty in the market (OPEC+ meeting, G20 Meeting, global growth concerns) will keep E&Ps cautious, but in the short term- won’t cause any adjustment to drilling plans. EOG, Continental, Chevron, and Exxon have maintained their top spots in drilling activity, but the merger of Anadarko and Oxy will propel them into the top three. The new data from Primary Vison coming next month highlights activity growth, and indicates companies with the largest chance of expansion vs decline. Range Resources and other natural gas names fall into the category of challenging pricing frameworks, while Pioneer’s steady activity highlights its firm transport capacity. Pioneer remains a premier takeout target for the majors looking to pick up contiguous acreage in the Midland (heavier vs the Delaware) with decades of running room and firm transport.

Completion Activity will remain well off 2018 highs for several reasons:

The last point lends itself to the roll out of electric frack fleets that can utilize centrally built turbines and powered by associated gas from the wells. The total cost of the fleet can adjust between $35M-$50M depending on who incurs the cost of the turbine. For example, does Haliburton come in with a turnkey solution or does Exxon purchase and operate the turbine and outsource the rest of the equipment needed? The electric spreads are more efficient, less wear and tear increasing equipment life, and cheaper to operate. The biggest hurdle is the upfront cost of the fleets, which will play into the hands of the large major’s oil field service companies and integrated E&Ps, while sending the smaller operators scrambling.

Pressure will remain across the U.S. energy market driven by weakening energy and economic fundamentals abroad and soft demand globally. As refiners are the largest buyer of crude, refined products are the best way to gauge future demand and price movements. The market is showing signs of oversupply on a global level based on product movements, crack spreads, and storage builds. This will keep Brent range bound and targeting the low $60’s and WTI along mid $50’s level. This will limit the activity of the private E&P companies, while the majors/ independents maintain guided activity, because they typically won’t adjust drilling programs unless soft pricing is expected to last for six months or longer. With the impeding OPEC+ meeting and rising tensions with another tanker attack, the market could shift- but the oversupply would take time to clear. Even if OPEC+ announces a “larger” cut, countries such as Russia, Iraq, Angola, and Nigeria have been slow to meet targets, ignored them completely, or received waivers.

Global oil storage is rising as product builds and inherent oil demand remain lackluster, which has already struck throughout Asia, and is now reverberating through the system as product looks for a home. Two tanker attacks weren’t enough to push the crude market higher, as global oversupplies persist. The OPEC+ meeting is now set for July 1-2, which will be a focus because the deteriorating global economy, growing oversupply, and reduction in global oil demand may push for a steeper cut in production. The fact the group has been unable to agree on a date to meet could be a precursor for the inability to increase let alone maintain, current production levels.

The energy market remains awash in refined products, which will weigh on the recent rally in crude pricing. Singapore builds have started to increase following large exports of product into the U.S. and across parts of Europe. Diesel exports remain strong out of Asia- highlighting softer demand, which is manifesting in weak industrial data. India indication for crude demand was down 4%, while refined product exports were up close to 20%. For example, India has additional shipments of diesel and refined products flowing into Europe as local demand for refined product falls under pressure. For example, a shipment was initially destined for the U.S., but the degrading market sent the high-octane gasoline blendstock into Cyprus. This comes at a time when Europe product storage is reaching seasonal highs, and counter seasonal builds have the U.S. markets. Demand for refined products in the U.S. has recovered as flooding and rain slowed across the Midwest. PADD 2 is important for U.S. demand as the region accounts for the most miles driven, and the consistent rain set records, broke levees, and sent the Mississippi over its banks in many regions. PADD1 (with the shut down of the PES Refiner) will now require additional imports from Europe, and whatever can be priced to flow from PADD3 (Jones Act restrictions drive prices higher). Product tanker rates have already started to respond to additional product being pulled in from Europe.

The growth in crude builds will continue as global demand faces economic growth headwinds, and oil supply continues to rise into a soft market. U.S. product demand and exports have recovered, but even with a big crude draw the U.S. is still well above seasonal storage norms. Refiner rates are now along seasonal norms of 94.2%, but unlikely to rise much higher in the near term. Imports of oil are also expected to rise into PADDs 2 and 5- offsetting some of the bullish numbers this week. While the below chart from the IEA is from May, the trend has only accelerated sending OECD oil inventories closer to 3,000 (in millions) as we close out June. 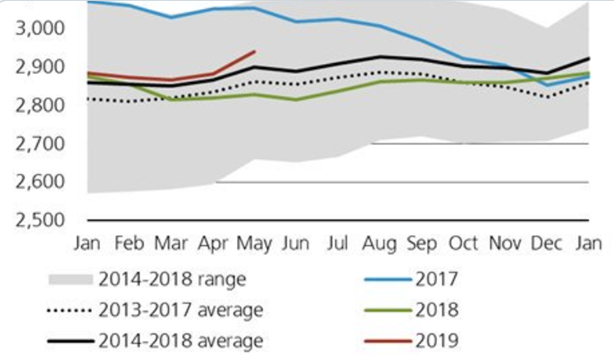 Angola has been unable to sell out the remainder of July with more shipments slipping into Aug, and Nigeria running into the same issues (Angola and Nigeria are the first to sell their cargoes and the quality of crude -Medium sweet- is the “goldilocks” of the industry). A big driver of this decline remains Asia as oil demand weakens further with limited flows into Asia (specifically China- accounting for a large portion of the drop) sending the available VLCCs to multi-year highs with rates dipping again. Russian Urals traded to eight-month lows also highlighting the oversupply of physical crude in the market.

All these negative data points are compounded with a slowing global economy causing central banks to ease abroad. The base case from Osaka is a pause in the trade war between the U.S. and China, but the underlying economic data will weigh down any positive news from the G20 meeting. Asia data for June will be pivotal, but the early indications based on crude and product flows points to further weakness. Economic data has softened considerably in Asia across exports, freight, and lending. China has experienced growing concern in their banking sector with a takeover of the Baoshang Bank and some small repo contracts going defunct. Short term liquidity in China has seized up creating a problem for inter-bank lending. Besides China, “India’s largest refiner Reliance Industries Ltd. is shipping its second cargo in a month of high-octane gasoline blending components to the U.S. at a time when nationwide fuel demand is lagging behind the pace of the previous three years, according to data compiled by Bloomberg. The tanker Arctic Flounder loaded about 60,000 tons of 93-octane alkylate at Sikka, India, in late May.” Europe will put in soft numbers again, but should be slightly better versus the beginning of the quarter. The focus will remain on Brexit and export data out of Germany as softness persists in the fringe countries. Italy remains the weak point, but deteriorating French data could structurally shift the conversation. Emerging markets are in a challenging position as each central bank/local government is running out of optionality to address local level problems. The shift lower in USD acts as a small reprieve, as the market priced in FED cuts- but the move was controlled and stopped right at support levels. The dollar remains range bound, but more aggressive action from foreign central banks and a potential for no FED rate cut at the next meeting will send the dollar out of this range higher. A stronger dollar, weaker economic data, compressing industrial output, and slowing exports will all result in reduced product demand and oil price.