The U.S. frac spread activity continues to decline on the national scale with 8/30 projecting active spreads at 395 down from the peak of 482 from the week of April 5th. The biggest declines have been in the Permian by approximately 25 spreads released in the area. Based on our seasonality work, activity in each region should start ramping at this period, but with the current price deck and focus on living within cash flow this increase is highly unlikely. Instead of an increase, completion crew activity will stabilize along the depressed lines. The biggest declines occurred in the Permian, Eagle Ford, and Williston, and the area that will see some reactivation of crews will be in the Eagle Ford. The ability to blend crude with Gulf of Mexico provides a better-quality product versus what is flowing from the Permian. Even with Epic (600k), Cactus II (335k in 2019- expanded next year), and Gray Oak (900k in 2020) either online or operational by year-end- E&Ps will divert uncontracted flow to these pipes to streamline operations and fill their firm transport obligations. This just means Permian E&Ps’ with firm transport won’t have to drill to meet their commitments, but rather balance the approach with oil stuck behind pipe, diverted flow, and new completions.

Completion crews will trend closer to 2017 versus 2018 as E&Ps continue to evaluate drilling programs and evaluate ways to reduce cost while maintaining production targets. Natural gas activity will remain challenging as pricing is below many cash cost break-evens (if not all of them) putting pressure on realized prices. The NGL basket was providing some uplift, but with competition in the market, limited export capacity, and naphtha pricing has pressured pricing across the complex. Some companies with hedges can weather some of the storm, but there will be some additional slowdowns in the Marcellus- especially as we head into the shoulder season. The Utica/Haynesville has reached a point that will remain relatively stable at 7 and 9 crews respectively. The additional LNG activity in the Gulf Coast will help support Haynesville activity as this spread count.

The demand for U.S. crude will remain challenging as demand slows and countries have reached limits for their ability to run U.S. grades. India has purchased many distressed cargoes floating off the coast of China stuck in the tariff battle, so the question will remain- is India now tapped out or will they be back in the market for U.S. grades with available cargoes out of West Africa. I would say India uptake of U.S. volume will slow into end of Oct. South Korea made the following statement: “Platts: South Korea refinery official – “We have been testing new US grades to check whether they are suitable for our facilities or not, though we can accept only a limited increase in shipments from the US because we have already sharply increased imports of US crude.” The plethora of naphtha and light distillates in the market will put pressure on the sale of light-sweet crude, especially U.S. blends.

WTI pricing stabilized as the U.S./China agree to continue talks, but as I explain later- these “talks” will continue with little resolution as both sides continue to drift further apart. This will shift U.S. crude into other regions- South Korea/ India- as China absorbs more capacity from Saudi Arabia and rest of the Persian Gulf leaving SK and India increasing purchases from the U.S. Based on the commentary and current flows into each country, the U.S. will struggle to find additional locations to place shipments.

The EIA posted healthy draws across crude, gasoline, and distillate- but implied demand has adjusted lower, which is typical around the seasonal adjustments for 1) end of driving season 2) shoulder season. Crude imports will continue to rebound as exports face headwinds through the end of the month and into Oct. Gasoline imports will remain subdued as builds start to ramp with demand slowing and refinery utilization remain relatively strong for the next 2 weeks or so. Exports out of the U.S will be pressured as more European and MENA product competes for a home, and will result in rising storage within the U.S. As refiners go into maintenance season just as new pipelines come online with falling export demand, storage at the coast and in cushing will fill quickly causing pressure across realized prices. This will result in the spread between WTI/Brent to expand by $2 and put rising pressure on WTI Midland Light. 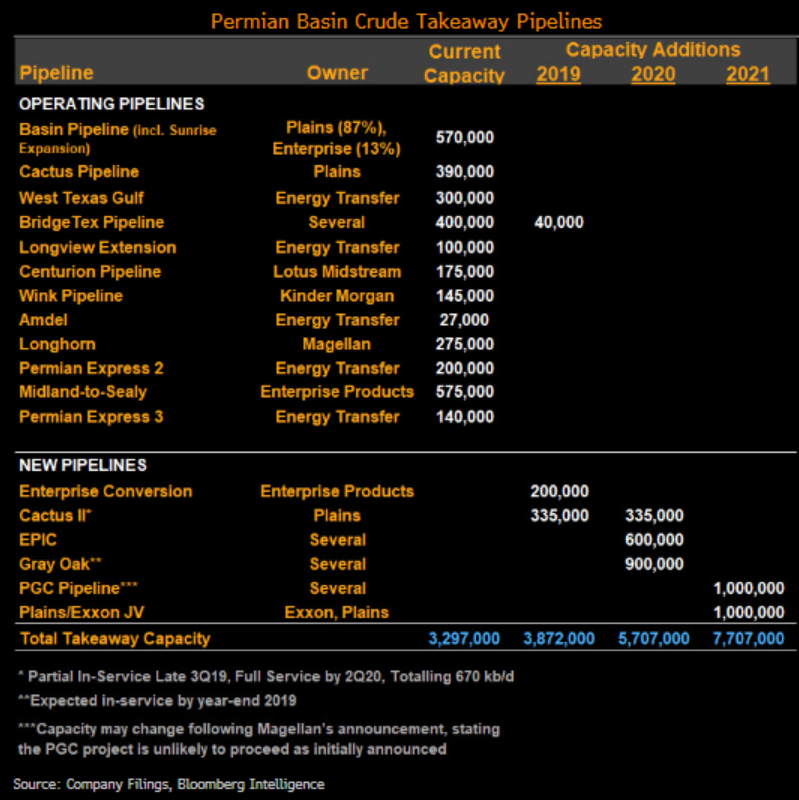 The global crude market remains volatile with tweets and trade war comments shifting near term prices by 3% or more up or down in a day. While the market focuses on China and U.S. comments, it is better to dig deeper and focus on the supply/demand forecasts of the physical product. Russia increased production/exports in August that was above the OPEC+ agreement but should fall back inline for Sept (or so they say). The production and export have risen from Russia that now claims to have the lowest break-evens in a decade. Russia has been increasing exports of naphtha, and will increase crude export of ESPO Blends (35.6 gravity and .48% sulfur). The crude slates will continue to be a focus especially as European refined product storage remains well over seasonal averages. The slates will get heavier as the market remains awash in gasoline and naphtha. Some respite will come in the shape of additional exports into Western Africa, but it will be short lived- especially as the driving season in the U.S. comes to a close. This week will be a bullish one in the U.S. as draws are always strong in crude and gasoline ahead of Labor Day weekend. The increase in refinery maintenance in the U.S. will lead to stranded Permian oil at the coast (due to falling exports and soft local demand), which will put pressure on local pricing hubs.

Even though total output is normalizing (according to Russian officials), the exports of specific grades are adjusting as crude quality continues to shift front and center. This comes on the back of softening Ural refining margins, competition from West African Blends, and Persian Gulf OPEC exports rise. Gasoline margins remain under pressure globally with more builds across the global complex, which will only get worse as we head into shoulder season and ramps in ultra-low sulfur diesel runs ahead of IMO2020. Russia- as shown above- highlights that even in an “agreement” scenario is producing well over the last 5-years’ worth of data. The below chart shows the spike in production across the listed countries on the left as Nigeria, Angola, Russia, and Libya drive expansion in their output levels. The mix of crude is key as West Africa is medium/sweet- while Russia and Libya can provide key heavy blends the world is currently missing. The problem has been the inability of Angola and Nigeria to clear shipments over the last few months- “At least one-third of 41 Angolan cargoes for October loading are still available, say traders with knowledge of matter. Pace of sales slower than normal; most Angolan cargoes typically sold out at this time of a month.”

The below highlights the steady flow of crude from the Persian Gulf, which will continue to drift higher as refiners within China ramp up with some offset due to reduced teapot output. The problem will remain the under-reported Iran barrels that continue to bleed into the market, and as the China/U.S trade continues (and it will for the foreseeable future) China will start increasing their runs of Iran crude. Two refiners totaling 800k barrels a day of throughput were built with the view that Iran was going to be a big part of the slate- so there will be additional exports from Iraq, Iran, and Saudi Arabia.

Even as OPEC production has hit 5 year lows, crude pricing remains under pressure as demand remains the core concern with gasoline margins struggling and only supported by distillate cracks. The distillate crack will be key as to refinery operations, and slowing demand (seasonally adjusted) and rising stocks will start to put pressure on the remaining crack. Builds have been reported across Singapore, Europe, Japan, and Fujairah with little respite as economic data continues to worsen on a global front. Flows of refined products to the U.S. have fallen from Europe to a 6 month low, and with shoulder season upon us this will continue to drive builds globally as product attempts to find a home/ cheap storage. The Mid-east to China oil tanker rate shifted to a four-week low as demand remains the top concern. Even as OPEC production remains at 5 year lows- global crude prices remain under pressure as shown by cracks, storage, and shipping rates.

The focus remains misplaced on tweets/ commentary that lacks context and viewed through a lens offers little relief to the current cyclical and structural implications across the crude market. The China/U.S trade deal remains far apart with little middle ground remaining to work through. China is facing an identity crisis at home with the CCP ramping commentary around party allegiance and sacrifice, while looking at strengthening deals with other nations to make up for lost crude/ naphtha/ food imports from the U.S. As we head into shoulder season, product builds and distillate cracks will be indicative for crude pricing over the longer term. China is hardening its stance- which on the surface may not seem apparent- but the rhetoric in key speeches and positioning indicates a long-drawn out fight. Polls within the U.S. still highlight political support for being “tough on China”, and now with renewed WTO grievances filed and tariffs increased on Sunday- this is far from over. Demand destruction will continue driving seasonally adjusted large builds across the complex in the shoulder season resulting in crude pricing pressure. The lack of demand for U.S. crude will result in softening of realized prices and pressure across the basket of products.